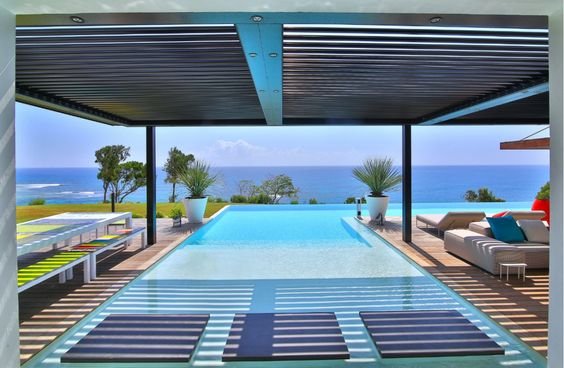 Before it became one of the finest hotels of Guadeloupe,  La Toubana Hôtel & Spa built its reputation step by step, thanks  to the energy and passion of the family who run it. For more than thirty years, from father to son, from parent to child,  the clan has striven to meet the needs of its clients, with sincerity,  taste and refinement. A fifth star will make this magical place  the first of its category in Guadeloupe.

In the 1950s, Robert Vial Collet, from the French region of Savoie, arrived in Guadeloupe by boat. There, he met a beautiful Guadeloupean, Michèle. They married and had three children. In the 70s, this man of vision purchased the land which was to become the site of La Toubana. At the time, his father-in-law told him he was making a serious mistake by buying a rocky cliff where neither bananas nor sugar cane would grow! In 1984, the hotel finally opened its doors, proposing 18 little 2-star “boxrooms”. In 2005, the family obtained a third star, then a fourth in 2012. The establishment was next run by Robert’s son, Patrick, and his wife, Corinne, who later passed it on to Chloe and Aston, their children, who are still in charge today.

At La Toubana, each bungalow nestles in a little cocoon surrounded by vegetation. Each one has its own beautiful patio and a breathtaking view over the sea. Inside, the shutters allow the light in, creating a calm, embracing atmosphere. The communal areas are a continuation of that atmosphere, with a cozy and chic Creole style. The restaurant and bar can be found by the infinity pool. From up there, the view over Marie-Galante and the beach of La Caravelle is stunning.

Two restaurants, two ambiances. One is by the sea, next to the beach, the other is up by the pool. Every year, the menus of both restaurants are rewritten but certain iconic dishes, like grilled lobster, always remain! Each dish is created and concocted with seasonal produce selected from small growers. We use typical, local, fresh ingredients!

The “villas” section was built and included in the hotel complex in 2014. It is totally independent from the bungalow area, with 3 luxury villas and 12 suites, including 2 with their own pools. Architect Guy Benoist and decorator Muriel Chabernaud were called upon to ensure the site retained its original spirit and distinctive charm, without adopting an overly modern style. The rooms are arranged in such a way as to make them completely independent. This bright, spacious area allows good freedom of movement. In the early morning, the spectacle of nature over the sea and the song of birds promise a wonderful day. While allowing the daylight in, the shutters create a pleasant, soothing atmosphere. Far from the hustle and bustle of the outside world, the body relaxes under the jets of the Italian-style shower. A real cocoon of happiness to share with your loved ones.

The new, fully refurbished reception area… and the beaming smiles of our staff… make you want to stay a while. And who better than the locals, who know the island so well, to put the finishing touches to your vacation? As for our beauty facilities, the Spa has a brand new reception area and relaxation lounge, as well as new cabins and changing rooms. At the beach, the seawall is now a beach in its own right. For pareos, beach tunics and bags, we have opened a handy boutique.

“When you hire a villa at La Toubana, you also get access to all of the hotel’s facilities and services, including daily cleaning, your own chef if you so wish, access to the Spa and swimming pool, as well as beach services. Our team will always do everything they can to satisfy you, within reasonable limits. If you want a butler, a yoga lesson, a chef, a massage or a swimming lesson… all of this is possible” explains Chloe. When the dream becomes reality…